A new malware every 7 seconds

Data breaches, fake apps, worms, and a host of new malware – Android users were increasingly in the cross-hairs of cyber criminals in the first half of 2018. G DATA researchers counted over 2 million new malware apps in the first half of 2018, 1.2 million of these in the second quarter alone. This focus on Android is no surprise, as the operating sys-tem’s market share has increased once again. In the second quarter of 2018, some 76 per cent of smartphones worldwide had Android installed on them.

The article is available in the G DATA Security Blog. 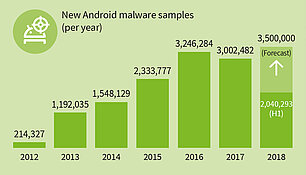