Ransomware in the company

How to protect your business from ransomware trojans

Ransomware is keeping the corporate world on its toes worldwide. The trojans attack entire networks and encrypt all the data they can find. Databases, patient files, CAD drawings - nothing is safe from the sophisticated malware. But how does ransomware actually work? How does it get into the company network and how can you protect yourself against it?

Ransomware is a type of malware that encrypts important files, thus rendering them unusable, and demands payment of a not inconsiderable sum of money for decryption - usually in the form of Bitcoins, where the flow of money is easier to disguise than with conventional currencies. The data is held hostage by the malware and is only released again upon payment of a ransom. Because of the way they work, these malware are therefore often also called "blackmail trojans", "encryption trojans" or "crypto trojans".

Famous examples in the corporate environment 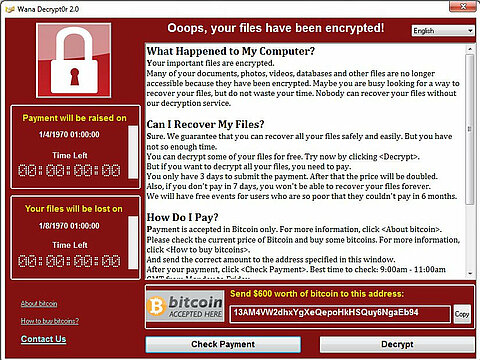 In the early hours of 12 May 2017, a massive wave of infections was discovered, infecting PCs and networks with the latest version of the WCry / WannaCry ransomware. In Spain, the major telecommunications provider Telefónica, which includes the German mobile phone providers E-Plus and O2, was affected. Computers of the British health system were also infected. Images of Deutsche Bahn display boards showing the ransom note after being infected by WannaCry became famous. 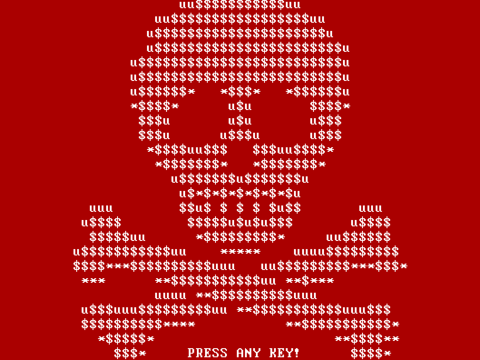 Petya was hidden in a Dropbox file that was supposed to contain a job application folder. Instead of an applicant's documents, however, uninformed personnel managers downloaded the ransomware. If this file was then opened on a PC, Petya spread throughout the system. Especially the second wave in June 2017 with updated malware caused great damage worldwide. The G DATA experts dubbed the malware "Petna". Petna caused the entire IT system at the Hamburg headquarters of the Beiersdorf Group to fail, and Mondelēz was temporarily unable to produce Milka chocolate. Just like WannaCry, Petna spreads like worms throughout the entire network. 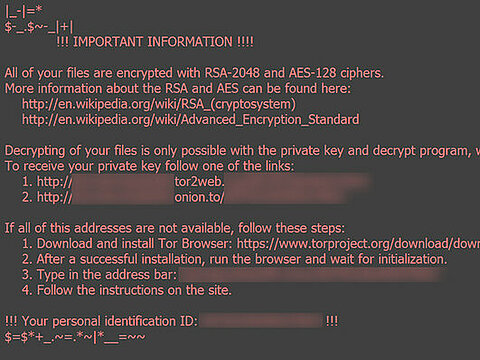 One of the first known examples of ransomware is Locky. In February 2016, the malware attacked numerous Windows and Apple computers, especially in Germany. However, Locky cases also became known in the USA: Perpetrators stole over 15,000 euros from two US hospitals whose medical records had been encrypted by the malware. German hospitals were also affected by similar extortion Trojans.

There are currently three main types of ransomware: Screenlockers are a more harmless variant that only lock the user's screen and deny him access to his system. They can be removed relatively easily and do not cause any further damage. File crypters encrypt files on the hard disk so that they cannot be recovered without the appropriate key. The most dangerous type are so-called wipers: Just like file crypters, they encrypt the data on the hard disk and demand a ransom - only here it is not intended that they actually restore the data. Wipers are programmed to delete as much data as possible and thus cause maximum damage - regardless of whether a ransom has been paid or not.

Ransomware usually comes via email: The blackmailers often send emails with a malicious attachment. The malware disguises itself, for example, as an Excel spreadsheet with macros or as an EXE file that looks like a harmless ZIP archive. When the user opens the file, he or she unwittingly installs the trojan. At the latest, the trojan begins to encrypt the files on the computer's hard drive and all connected drives when the computer is rebooted.

Some representatives (such as WannaCry) additionally function like a worm and attempt to infect other computers via the network. It is worth noting that the blackmailers are sometimes very clever: For example, the "GoldenEye" malware, which was rampant in 2016, targeted human resources departments in Germany. The emails were written in impeccable German and referred to actual job advertisements of the company. Even cautious employees in the HR department therefore opened the attached files and thus infected their computers.

The only thing that then appears on the screen of the affected clients is a ransom note promising to decrypt the data again in exchange for payment. To do this, the user is supposed to enter an individual serial number, which he can buy on websites in the Tor network in exchange for Bitcoins. To lend weight to the demand, some files are often deleted every few hours until finally there is no more data left. Usually, the serial number increases in price just as regularly to force the user to act quickly.

Do not pay a ransom under any circumstances!

Even if you pay the ransom demanded, you rarely receive a functioning decryption key in return. In the case of so-called "wipers", your data is lost in any case, even if you have paid the ransom - in this case, there is no technical provision for the data to be decrypted again. If you signal your willingness to pay, the blackmailer may take advantage and encrypt your files again by reactivating well-hidden parts of the malware after a while and demanding money again. Not to mention that the scam remains lucrative for the blackmailers due to the paying victims, which will always bring imitators with new malware on the scene.

If your network is infected by ransomware despite all precautionary measures, you should immediately isolate the affected clients or servers. Cut all network connections (preferably physically) so that the malware cannot spread any further. Then reset the infected computers and restore the last backup. Scan all other clients and servers in the network with a reliable security solution to rule out infection. This step is very important: Some malware hides in the operating system in order to strike at a later point in time - a client that appears "clean" at first glance may well be infected with malware.

If you do not have a current backup of the infected client or server, your data is not necessarily lost: Especially for older ransomware, there is often already an antidote. Experienced security experts have cracked the encryption routines of many pests and developed programmes that can decrypt the data again and render the ransomware harmless. Look on the Internet for corresponding tools, which are usually named "XY Decrypter" or similar.

If the situation is more complex or conventional methods do not help, professional advice from an experienced service provider in the field of IT security is a good idea. The experts at G DATA Advanced Analytics, for example, not only offer first aid for security incidents ("incident response"), but also data recovery measures and in-depth malware analysis. This way, after an infection, you can be sure that the malware does not hide deep in the systems and break out again at a later time.

ransomware victims have paid in the last two years. Ransomware has become a multi-million dollar business for cybercriminals.

at most is what the "Cerber" ransomware needs to fully encrypt a computer after infecting it. 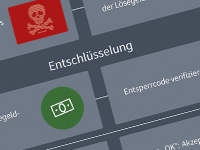 What actually is social engineering?

The term describes ways of deception and persuasion by which victims are coaxed into giving up information.

What actually is IT Compliance?

Companies face severe penalties if they do not comply with the law. IT compliance policies help to prevent costly problems.

Things can go wrong in the home office. Here's how to avoid stumbling blocks and IT hazards.